Each Lip Kit (with a liquid lipstick and matching pencil liner) normally retails for $30, so this is a steal, and it’s one that doesn’t come around often. Wha

Black Chyna turned heads on Monday when she arrived at the 2019 MTV Video Music Awards at the Prudential Center in Newark, New Jersey, wearing a dress that Kylie Jenner wore just a few weeks ago.

Chyna stepped out on the red carpet wearing a neon-pink minidress covered in ostrich feathers, designed by the Italian brand Attico — it costs $4,569 at Saks Fifth Avenue. She completed the look with a strappy pair of neon-pink pumps and a diamond necklace.

Just two weeks ago, on August 10, Jenner shared photos of herself wearing the same dress while celebrating her 22nd birthday.

In her Instagram photos, Jenner poses on a boat while wearing the dress with a layered diamond necklace and yellow sunglasses, and no shoes.

Read more: Kylie Jenner wore a corset over a floral dress that looked like it came straight out of the Victorian era

Of course, it’s not uncommon for celebrities to wear clothes that other stars have already worn. Sophie Turner, for example, recently wore an Alexandre Vauthier gown that Taylor Swift donned in 2016. 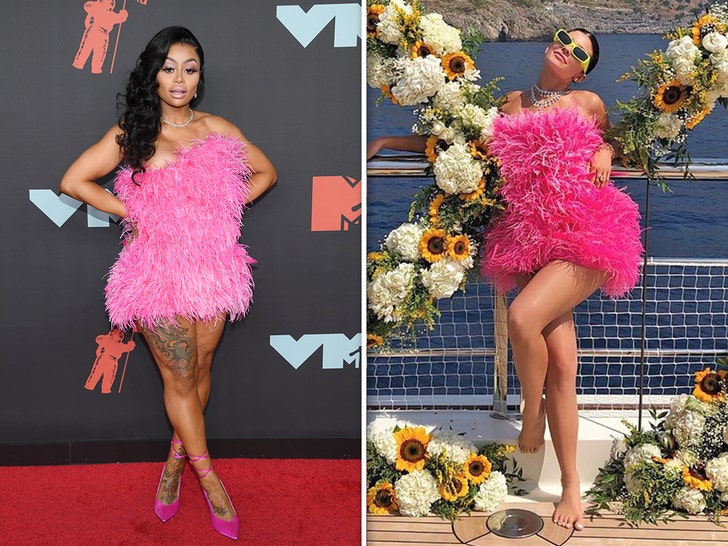 3:07 PM PT — Chyna’s stylist, Deno Just Deno, tells TMZ … there was nothing malicious about her dress choice — it was neither Kylie-inspired or directed at Kylie.

Deno says BC didn’t decide to attend the VMAs until 3 days ago, so he picked up several dresses for her at the last minute and they both loved the pink, feathery getup. Deno tells us it was just a coincidence it was the same dress as Kylie’s — they didn’t know she wore it because they don’t follow her.

He adds he wasn’t aware there was a hubbub about Chyna’s wardrobe until he woke up today, and he doubts she’s caught wind of it … yet.

Blac Chyna might have ruffled a few feathers with her wardrobe choice at the MTV VMAs … because Kylie Jenner just wore it a couple weeks ago.

Chyna opted for a hot pink feathered mini dress for the awards show Monday night, which would normally be no biggie … except for the fact Kylie rocked the exact same dress during her 22nd birthday trip.

As you know … Chyna and the kardashian/Jenner crew do

Now, ET’s breaking down the biggest revelations and best moments from the one-hour, 25-minute documentary.

Yep, even those medical check-ins! Around 15 minutes in, after seeing Travis play a show in Houston, Texas, in 2017, the screen goes black and then cuts to footage of Kylie in the hospital getting an ultrasound.

“Trying to figure out how much pressure you applying to that thing, OG,” Travis jokes to the sonographer, as Kylie watches the monitor intensely. “There’s a young up in there, OG.”

For their night out, Scott wore a brown suit while Jenner, 22, opted for a strappy white dress. The rapper, 28, could be seen giving his daughter a sweet kiss on the cheek as Jenner held her in her arms. Stormi looked red carpet ready in a green and brown patterned onesie paired with white sneakers.

Scott’s documentary gives viewers a look into the musician’s life and rise to stardom — from his childhood days to becoming a dad last year. A trailer for the Netflix film includes home footage clips of Scott as a kid, video from his Super Bowl halftime performance and clips of Jenner and Stormi.

Want all the latest pregnancy and birth announcements, plus more celebrity parenting news? Click here to get those and more in the PEOPLE Parents newsletter.

Stormi recently embarked on a luxurious European getaway with her parents, in honor of her mom