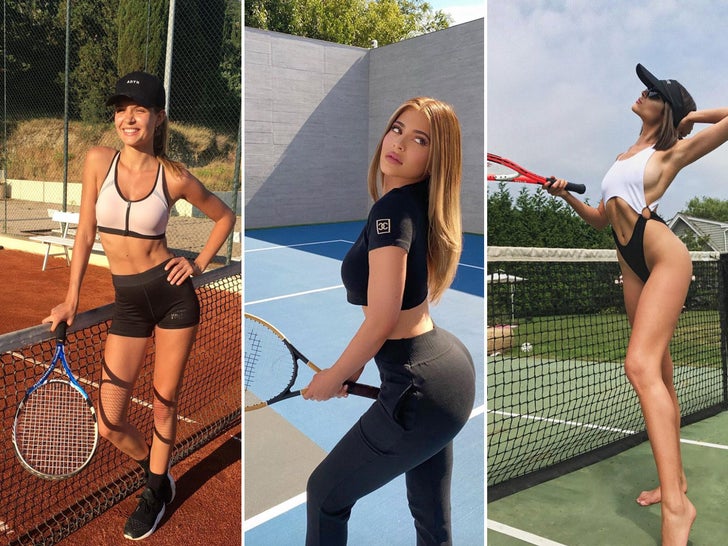 It looks like these sporty babes have been heading down to the courts, and serving up some seriously hot shots while they’re at it … and all this time inside, it’s no wonder these ladies want to get out and about!

Stars such as Josephine Skriver, Kylie Jenner, and Olivia Culpo are managing to keep their distance, while still making time to have some sweet summer fun … And they aren’t the only ones sharing their swinging snaps!

Get ready for the US Open by taking a look through our gallery of tennis babes making a racket to see all the other famous faces that are hitting us with these hot shots!

Eli Russell Linnetz is a photographer, designer, producer, director and overall versatile creative. He founded a clothing collection titled ERL and was featured through an exclusive photo series for the cover of HYPEBEAST Magazine Issue 29. But today he returns with a particularly special surprise — a music video he directed for Tyga and Kanye West some three years that never saw the light of day.

“Feel Me” was featured o

A previously unreleased video for Tyga‘s Kanye West-assisted track “Feel Me” has surfaced thanks to the clip’s director. Eli Russell Linnetz, who also directed West’s “Fade” and “Famous” videos, shared the clip to Instagram on Wednesday. “I directed this three years ago,” he says in the post’s caption.

The video for the single, which appeared on Tyga’s BitchImTheShit2, reportedly took five months and $1 million to make but

Kylie Jenner thanked her fans for the success of Kylie Cosmetics’ Sailor Collection in an extremely appropriate outfit resembling its cute packaging.

The beauty mogul took to Instagram to thank fans for supporting her Summer collection. Jenner wore a red and white striped off-the-shoulder top and a blue ribbon on it. She finished the look with a sailor hat while her brunette hair cascaded past her shoulders.

Jenner looked seductive in the shot, with her lips painted in a bright red hue and her eyes in smoky eyeshadow.

The look mirrored the illustration on the collection’s packaging, where the grap

Director Eli Russell Linnetz gave fans a glimpse of a bizarre 2017 music video for Feel Me, sang by Kanye West and Tyga.

The video showed Kim kardashian and Kylie Jenner parading in thongs and stripper heels while a Calabasas monster truck cruised around. Both sisters were seen rocking blonde hair, with Jenner’s transformation being the most dramatic as she donned a platinum pixie cut instead of her long tresses.

Jenner had blue smokey eyeshadow on her lids and a nude shade on her lips. kardashian, on the other hand, rocked a wet look with her long blonde bob. kardashian wore a G-string and matching bra, while Jenner wore silver thong panties and a tiny white crop top.

Jenner and kardashian were shot to look like giants, walking among a

Kylie Jenner and Kim Kardashian look completely unrecognizable in a newly leaked Kanye West music video. On Wednesday, Sept. 2, Eli Russell Linnetz, who directed the video, surprise dropped the official footage on YouTube. The music video for Kanye and Tyga‘s 2017 track “Feel Me” hasn’t seen the light of day, until now. At this time, it’s unclear why the nearly t

If you were confused by the end of Kanye West‘s leaked music video for “Feel Me,” featuring Tyga, look no further.

Director Eli Russell Linnetz, who directed the video as well as Kanye’s “Famous” and “Fade” videos, exclusively told E! News that the shot of Kylie Jenner seemingly walking out of Kim kardashian‘s nether-region is symbolic of her rise to fame. “It features Kylie coming out of Kim’s vagina,” he explained. “The metaphorical meaning being that there would be no Kylie wi

We probably don’t need to tell you that 2020 has been a hard year for just about everyone who’s currently drawing breath (through a CDC-approved facial-covering, of course).

But it’s been a particularly rough one for Kim kardashian.

During one of his notorious rants, Kanye West threatened to divorce Kim and hurled brutal allegations at the mother of his four children.

Yes, West was in the throes of a bipolar episode at the time, but still — he publicly accused Kim of cheating on him with a rival rapper, which couldn’t have felt great.

And believe it or not, that wasn’t the only threat from within her family that Kim was forced to douse out in the past few months.

We probably don’t need to tell you that the Kar-Jenners are a competitive bunch.

And there’s no question about which sister dominated the summer of 2020 from a PR standpoint.

Kylie Jenner’s quarantine content has become the stuff of legend, with diehard fans and mainstream media outlets alike praising the cosmetics mogul for helping to entertain the masses during one of the most precarious times in American history.

We’re sure Kim is plenty proud of her little sister — but we’re equally sure she’s not ready to abdicate the throne just yet.

And that’s likely why the 39-year-old has decided to celebrate the start of September with an Instagram pictorial in which she rocks a nearly non-existent bikini.

“Happy place,” Kim captioned the pics without disclosing her location.

Kim didn’t reply to the FoodGod, so it’s a safe bet that she’s indeed on vacation, and she doesn’t want anyone to know her whereabouts.

Naturally, fans were absolutely stunned by the mother of four’s flawless figure.

“She’s like a fine bottle of wine gets better with age,” one commenter noted.

The pics raised a lot of questions about how Kim manages to stay in such amazing shape, and fortunately, we have some answers … sort of.

“We usually work out five days a week for about one hour, give or take,” Kim’s trainer Melissa Alcantara recently told Life & Style.

“Our days usually start at 6 a.m. She’s up and ready to go, even though it’s still dark out, which just shows she is not only serious about her health but her business, her family and her life,” Melissa added.